So You’ve Been Bitten By An Animal: Now What? 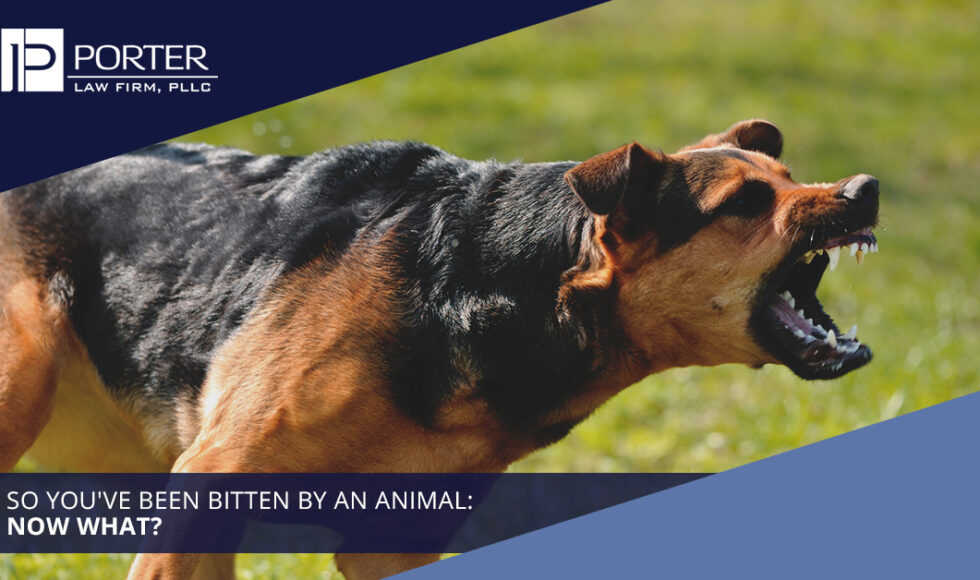 Have you ever found yourself walking down the street only to find a chain link fence separating you from a vicious animal? The odds are that at some point in your life that you have. Now, have you ever found yourself in the above situation but instead there is no fence and the animal bit you? If so, contact Matter Porter of the Porter Law Firm, PLLC right away. Instead of searching “attorney’s in Memphis, TN,” and wasting time, contact us and request a free consultation for your case.

If You Are Bitten By An Animal…

The first thing that you must do if you are bitten by an animal is to seek immediate medical attention. Often times animals that have tempers are untrained and not well taken care of, suggesting the possibility that the animal might have diseases as a result of not being vaccinated.

Is The Animal’s Owner Liable?

While it may seem like a black and white subject matter, as you have been bitten by an animal and the animal, of course, can’t provide you with a settlement, it is not always clear if the owner is liable. First, you must find out who the owner of the animal is. Second, you must consult an attorney in Memphis, TN like Matthew Porter of the Porter Law Firm.

Why does it matter to contact an attorney right away? Well, the state that you are in at the time of the attack can determine the next course of action. Some states enforce “strict liability”, meaning that no matter if the owner was aware, or not aware, of the actions of their animal, they are still legally liable for the animal’s actions.  Other states, however, the owner of the animal can only be held liable if they knew (or had reason to) know that their animal had dangerous tendencies and could be potentially dangerous to the health of others. If the owner can prove that they had no idea the animal was a danger to others they can be found to not be liable.

Potential Defenses For The Owner Of The Dangerous Animal

Just because you were attacked by a dangerous animal and injured does not mean that the owner is liable and you will be entitled to a settlement. If the owner of the animal verbally warns you that the animal is dangerous, if they took measure to try and keep the animal from attacking you, or if the animal deliberately ignored the owner as they commanded it to stop, the owner of the animal could potentially not be liable. That being said, there is a very fine line between what makes them liable or not liable so it is important that you contact an attorney in Memphis, TN like Matthew Porter of the Porter Law Firm.

In order to ensure that you have a claim to a settlement, it is imperative that you consult a legal professional, even if you think that you are positively eligible to make a claim. Why—you might ask? Well, in the case that you proceed without representation and are found to eligible for compensation, you may lose money. So do the right thing and contact a personal injury attorney for legal consultation and legal aid.

What Is The End-Game When Hiring An Attorney In Memphis, TN?

When you hire an attorney in Memphis, TN like Matthew Porter of the Porter Law Firm for legal consultation, the end-game is to make a legal claim to financial compensation — and to receive said financial compensation. Depending on the seriousness of an injury, the following list describes some of the reasons that you and your attorney could justify your compensation.

Having an attorney in Memphis, TN is extremely beneficial in the process of building you a claim and case, as they know the intricacies of the laws stating whether or not you are entitled to compensation. If you need legal representation, legal aid, or legal consult, contact Matthew porter of the Porter Law Firm today and schedule a free consultation.